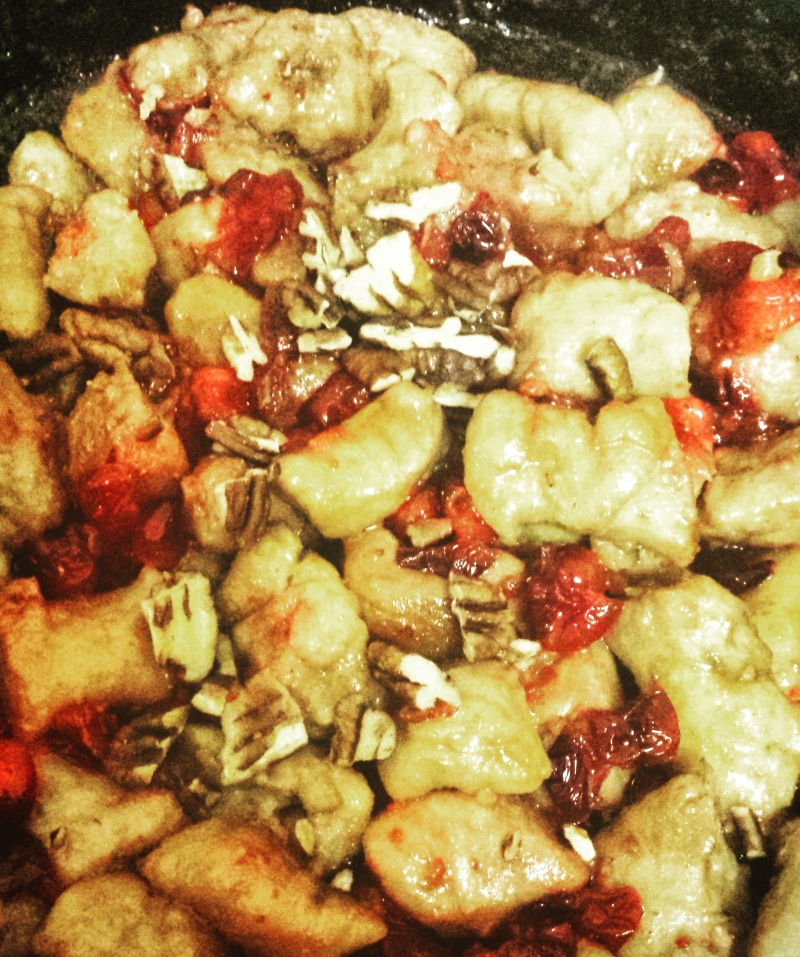 Gnocchi is one of my favorite pastas to make, because it’s so versatile. It adapts for whichever season you’re in, and whatever flours and starchy vegetables you happen to have sitting around – like a hearty, dumpling-shaped salad. Earlier this year, I posted a gnocchi tutorial, and this week, in search of a twist on traditional Thanksgiving sides, I made a sweet potato gnocchi that was beautifully complemented by brown butter, melted fresh cranberries, and toasted pecans.

I am not a food photographer, and I’ll be the first to admit it was difficult, even impossible, for me to photograph this dish in a flattering light. What I’m after, though, is the taste, and baby, this has the taste.

If you’re looking to enjoy Thanksgiving’s sweet potatoes without the abominable marshmallow topping, its pecans without the corn syrup, and its cranberries without any sort of gelatinous texture, this may be the dish for you. Plus brown butter. I couldn’t put brown butter into the list I just made, because it all sounded so negative, and the words “brown butter” cannot occupy the same sentence as anything negative.

My favorite part about this dish is the way the cranberries pop after a bit of a saute, then melt into themselves and in your mouth.

The only thing I did differently from the gnocchi recipe was to use two eggs, as the sweet potatoes I baked were quite large. I also used sprouted wheat flour, which adds a nice, whole-grain dimension to the recipe.

Gnocchi made from sweet potatoes and sprouted flour (My sweet potatoes were quite large and I used about two thirds of the gnocchi here)
1 stick butter (or half a block Kerrygold butter) plus 2 T
2 C fresh cranberries, rinsed
1 C pecans, chopped
3 T rapadura (or brown sugar, if you must – I never judge)
Crunchy salt, to taste

Get a large saucepan of water ready to boil for the gnocchi. Turn a skillet to medium or medium high and toast the pecans until you smell their pecany aroma. Set the pecans aside.

In the same skillet, brown the butter. I get it melted and a little bubbly over medium heat, then turn the fire down to medium-low and leave it for maybe ten minutes, or until it begins to darken and smell nutty. The smell is like nothing else in this world, and you may begin to fantasize about eating it straight, or pouring it over yourself like a Gatorade shower.

Pull it together,  and begin adding the gnocchi in batches to the boiling water. Get them out with a slotted spoon and let them drip dry in a colander.

While the gnocchi is cooking, scrape the brown butter out of the skillet and throw in the remaining 2 T butter over medium heat. When it’s melted, add the cranberries and rapadura or brown sugar and stir them until the sugar begins to caramelize and the cranberries begin to pop.

Put the gnocchi, brown butter, and toasted pecans in the skillet, stir, season to taste with crunchy salt, and enjoy.

21 Nov This entry was published on November 21, 2015 at 8:03 am and is filed under Collection. Bookmark the permalink. Follow any comments here with the RSS feed for this post.

Have something to say? Cancel reply